The Trunks by Reiko Fujii

During WWII, my maternal grandfather, Chikayasu Inaba, was imprisoned in several internment camps in the United States. One of these locations, Lordsburg, held the U.S. Army’s largest number of Issei (first-generation Japanese immigrant) prisoners, with a population peaking at 1500. Four months after my grandfather and his brother arrived at Lordsburg, a disturbing incident occurred that, even within the larger tragedy of the internment of Japanese Americans, stands out for its sheer brutality. On July 27, 1942, Toshio Kobata and Hirota Isomura, two elderly Issei, were shot and killed by a guard who claimed they were running away to escape. After a military investigation, the guard, Private First Class Clarence Burleson, was found not guilty. The official explanation asserted that he had lawfully killed them, even after many of the prisoners testified that Kobata and Isomura were both physically unable to run. According to his friend Hiroshi Aisawa, Kobata had suffered from tuberculosis for sixteen years, causing him to become disabled. Fukujiro Hoshiya, a good friend of Isomura, testified that Isomura had an injured spine: “At the Bismarck Camp, he walked with a very much stoop. He hurt his spine about ten years ago falling off a boat.” [note no.1] A fellow prisoner, Sematsu Ishizaki, claimed that the deaths of Kobata and Isomura were ordered by Colonel Clyde Lundy, the prison camp’s commandant. Isomura and Kobata had been involved in a protest challenging the illegal working conditions at the camps. The prisoners knew the forced labor they were subjected to was illegal under the Geneva Convention and they pressed for fair treatment under that standard. Their suit eventually led the Eighth Army headquarters at Fort Bliss to retire Lundy, close the camp at Lordsburg, and move almost everyone to Camp Santa Fe. [note no.2] My grandfather was transferred to Crystal City Family Camp in Texas, where he was reunited with his family after months of separation. There he finally met his youngest son, one-year-old Tony, for the first time. 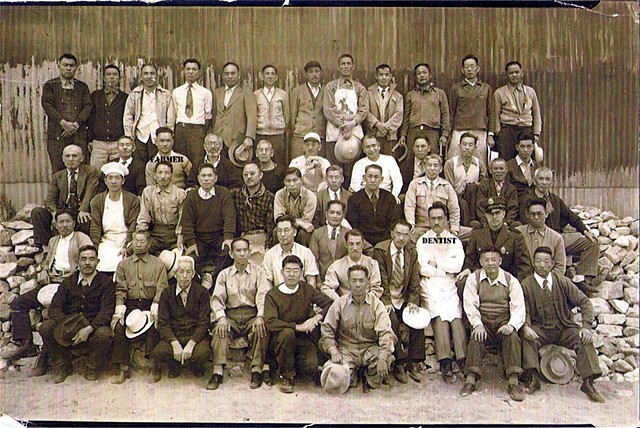